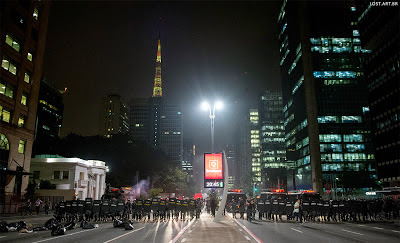 It is simple. As we wrote so many times, urban mobility should be a right accessible to everyone, without exception, as it is the health and education systems in Brazil. I'd much rather celebrate the Free Fare Movement, which is arguably a left wing movement, truly motivated by the people's needs, against losses that capitalism tries to impose and projects to ensure best living conditions for the most excluded in our society. The movement that it is on people’s side, and not governments’ side. The bus fare has no party and must be fought, regardless the political power situation. The bus fare is a wall that separates Israel and Palestine, which prevents the passage of a people through its territory. The bus fare is an urban apartheid.

However, I came here to write this short piece for another reason. To say that even being a huge protest, it just had one really violent moment: the premeditated end by the police. It wasn't tense in front of Terminal Parque Dom Pedro, whose outcome seemed simple: shock troops stood before the demonstration and tactical force stood behind. There was nowhere to go, they attacked, and we retreated. After this dispersion, several small and large protests happened simultaneously until everybody returned to Avenida Paulista. There, the demonstration took all the lanes of the avenue.

After walking for five hours through downtown of São Paulo, the demo was heading for a finale. Near the São Paulo Art Museum, a part of the protesters tried to occupy the other via of the avenue. Right there shock troops and several of their colleagues in the military police settled their base. Someone was arrested. I do not know why. There were very few people in this "wing". But the others protested for the release of the detainee. Anyway, the crowd shouted, the rest of the crowd was approaching and by this time the military police began to throw several of these new tear gas bombs, brutal, dense, that remain for much more time in the air, in your face and down to your trachea.
We were stuck, cornered. I'm talking about thousands of people, 5000, 6000, 7000 or so. A part of this group went down to the first street they found. Another remained crushed in the door of the museum; and another group tried to go to the avenue. Not satisfied with this first "dispersion", the police followed behind the protesters throwing one bomb after another. I counted eighteen, while walking without knowing where, without seeing and unable to breathe. At that time I saw the first guy wielding an iron bar. He wanted to break a TV corporation's car but everyone around stopped him. The police in turn struck again, pushing these people to the streets that surround the avenue, therefore, more gas bombs, and more smoke.

The revolt was stimulated from the outside, by those who have the monopoly of violence and toys capable of performing this violence against others who cannot do anything but break windows and bins. Probably tomorrow we will read on corporate media’s newspapers that the movement as a whole has as a main characteristic the thirst for violence. That's not true. Even though I do not believe in this moral e conservative tale about violence. In this society divided into social classes and controlled by an aggressive State, violence is permanent: in hunger, misery, and in the repression of the full development of each individual that is transformed one by one into mere machines for the production of wealth for the few.

The police chased protesters through the streets. In just one police station we saw 25 detainees. I await a precise number. In addition, as I’m writing this article, I read on twitter that "the officer responsible for the arrests at the demonstration against increasing bus fares demands R$ 20.000 (something like U$ 9.500) per detainee regardless of the charge." I've seen situations where the state was not only repressive, but cruel. All of them happened twice when our social movement in Florianópolis reduced the bus fares. The more they beat, the more the movement grew. The outrage because of the police brutality overcame media's manipulation and pushed the limits of the social movement. Many people came not only against the injustice in the public transport, but also against the government’s restrictions to our right to fight. By the way, we only have the right to fight just because many people have protested, and sometimes more intensely, against the civil-military dictatorship that occurred between 1964 and 1985 in Brazil.

Thursday will be bigger.


Proofread by Yuri Gama - Sociologist and supporter of MPL and tarifazero.org
às 5:33 PM