Free-fare movement in Brazil is the spark behind mass uprising

InSerbia News: "The protest was organized by the organization known as the Movimento Passe Livre, or the Free Fare Movement. Founded in 2005 in the southern city of Porte Alegre with the aim of establishing cost-free public transportation, the group’s demonstrations earlier this year just before FIFA’s Confederations Cup are credited with providing the spark for the protests that gripped all of Brazil for several weeks."


...Involved in the violence were members of the Black Bloc, an anarchist group based in Brazil, according to police. The same group was blamed for ushering in chaos at another demonstration earlier this month in Rio de Janeiro when a peaceful march by teachers demanding better pay ended violently. The trouble arose after the Black Bloc allegedly became involved.
An undercover police colonel dressed in plainclothes was allegedly attacked by the Black Bloc, but rescued by uniformed officers after they pulled him out of the masked anarchists. The theory that Brazilian police officials infiltrate a rally, blend into the crowd, and incite violence to allow for an official security reaction has been floated before, and this instance adds fuel to that fire.

BBC News - Black Blocs hijack Brazil teacher protests: "These are the Black Blocs and it was their actions on the fringes of the main demonstration that turned a hitherto peaceful event violent.
On previous occasions I have witnessed first-hand and seen powerful video evidence to support allegations that the security forces themselves have orchestrated or agitated violence in the crowd to justify their own, subsequent, actions but that did not seem to be the case in Rio, at least, last night.
There would later be criticism of the police from some quarters for being relatively slow to react and for not marshalling the demonstration in any way."

In this article, he says that less than 300 marched openly down the street, many with no masks. Why do the police not go straight to them?


After riot police were belatedly deployed, the rioters retreated, vandalising banks and smashing windows as they melted into the shadows.

Why were the police slow to react? Did they want to make sure their colleagues in the black bloc finished their work? Why do vandals always seem to melt into the shadows? Later in the article, he says


The Black Blocs are an enigma and nobody really knows who they are.

And yet they organize on Facebook? In this day of constant surveillance, somehow the black bloc moves around, marching in groups, and fading in the shadows, and no one knows who they are? Ha. ha.
In fact, black bloc is a police-organized group. There may be some people who join unaware of this, but without the police provocateurs, these groups would dry up and go away.
às 8:33 AM No comments:

Email ThisBlogThis!Share to TwitterShare to FacebookShare to Pinterest
Marcadores: #aps

National week of the fare free movement in Brazil - 26-Oct 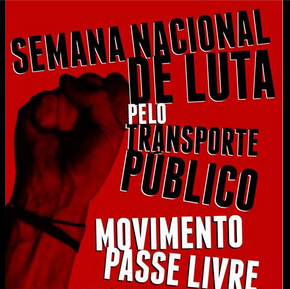 To mark the historical memory of this constant struggle that The National Fight Week Free Pass was created by and is marked by the 26th of October. This date is important because it goes back to the movements and achievements of the Revolt of 2004 in Florianópolis Ratchet, one of the struggles that gave rise to the Movement Free Pass. We must keep alive the memory to always remember that our struggle did not start now - and that will only end with the end of all turnstiles. This year several cities across the country are moving down to show that the increases was only the beginning: we really want is to zero the tariff, decommodify our right to come and go, making public transport is truth and end any type of ratchet. The struggle for a city of all / the remains - check the schedule and participate in actions in your city! 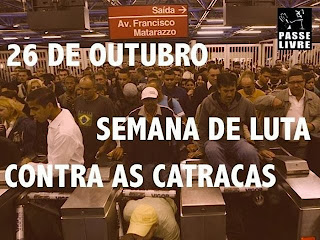 MPL: "Week of October 26-national week of fights for public transportation, celebrated annually since 2005 with demonstrations and catracaços throughout Brazil.
"