Eight years old, struggle for the free pass in Brazil 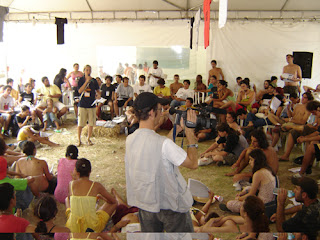 http://tarifazero.org/2013/01/30/oito-anos-de-movimento-passe-livre/
On January 29, 2005, the Fifth World Social Forum was held "by the National Plenary Free Pass", bringing together activists across the country who organized themselves to fight for the free pass student, inspired by the experience of Revolt Buzu (Salvador, 2003 ) and the achievements of the Revolt of Ratchet (Florianópolis, 2004). There was founded the Free Pass Movement (MPL): a national federation of municipal collective that under the principles of autonomy, non-partisanship, independence and horizontality, fighting for a public transportation without turnstiles.

Over the years, MPL has abandoned his initial claim - the only free pass for students - and began to advocate a new model for the transport system as a whole: the end of the fare collection ("Zero Rate") and the control system by the government, with popular participation.