Some illustrations used by MPL 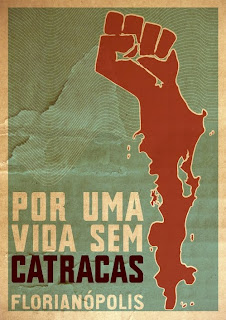 "For a life without turnstiles - Florianópolis"

Illustration idealized by Yuri Gama and made by the independent artist André Mesquita for the event of five years of the "Revolta da Catraca" (Revolt of Turnstile) - Building the resistance's memory. (The 2004 violent uprising against the bus fare's raise in Florianópolis - Brazil. At that time, the people's demand were guaranteed.)

Check out the work of André Mesquita here: http://www.flickr.com/photos/xdedex 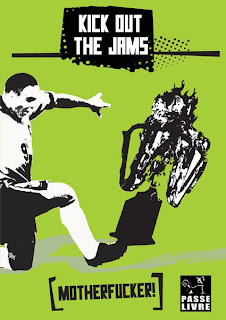 Illustration made by Flávio Bá for the Free Fare Movement (MPL), inspired by classic pre-punk band from Detroit (USA), MC5. It was used till some months ago as the opening image of the website of MPL from São Paulo - http://saopaulo.mpl.org.br/. 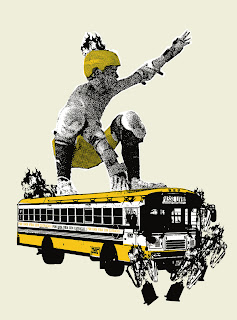 Another illustration made by the brazilian independent artist Flávio Bá.

Did you liked? Choose the size that you want to download to your computer: http://www.flickr.com/photos/antitudo/3312089442/sizes/l/ -

And do not forget to visit the Flávio's flickr: http://www.flickr.com/photos/antitudo
às 3:35 AM No comments:

In this initial post, I want to talk briefly about the connection between the struggle to the right to transport (which is a more specific fight) and the struggle to the right to the city (which is a bigger and generally fight), not only to mobility in cities, but to live and enjoy all what the urban space can offer and how we should be building this space, which only becomes free when it is a space of struggle.

Well, as a militant of Movement for the Free Pass (MPL) since 2005, I know we've come a long way in discussions, activities, discussions, creating materials (visual, textual, printed, video, ...), finally, a number of things were being built and in this long, but we can say fast, process, we grow up and immensely expanded our visions of the world and movement.

But all this was a starting point: the struggle for the Free Pass (student initially). It was from this specific flag that built the first collective in every corner of Brazil that would form the MPL nationally. From this visible concrete demand from the students and the need for immediate victory, with new projects, demonstrations and practical actions, that brought people to the fight, and put each and every one to create solutions we wish, transforming and occupying the spaces of intervention of the movement within an organization and creative collective based in horizontality, direct action and autonomy.

We followed from the student free pass to the right of transport, and from the right to transport to the right to the city, a movement that shifts from the more concrete and tangible to the more general and abstract (but no less necessary and feasible). Is in the warmest and teaching moments of the fight that we see the true face of the problem. Those moments are the moments when our political views are gestated, or put to test and assimilated by the population that follows us (directly or indirectly) in the streets. So, for example, all the demonstrations against tax increases become extremely fertile times and spaces to speak about municipalization, the creation of a Municipal Fund for Transport and the Zero Fare.

The idea here is to say how that we started to talk about the right to the city, beginning actually talking about the right to public transportation - highlighting the importance of the relationship of these two levels that need to be worked simultaneously at each moment of the fight, without forgetting the importance of the immediate needs but also without confine them, building a broader context of conquest and policy formulation from the needs felt by most society.

To close, I share with you a phrase from the great Russian revolutionary Mikhail Bakunin:

"What can the advertisement do? Bring a general fairer expression, a new and happier way to the instincts of the proletariat, can sometimes facilitate and precipitate its development, particularly in terms of a transformation in consciousness and reflected will of the masses. It can give them an awareness of what they have, how they feel, what they want already instinctively, but never could give them what they do not have, nor arouse passions in her breast, that according to its own history, they are strange. "

What is free fare?

Free Pass (or Zero Fare) is the most practical and effective way to ensure the right to come and go in cities for all the population. This idea is based on the understanding that transportation is an essential public service, a fundamental right that ensures the access of people to other fundamental rights such as health and education.

With the unplanned growth of cities, the access to health, education, leisure, work, among many others, started to be extremely complicated, besides costing a lot of money and several hours of our day. In large cities the displacements are a daily necessity, because without them the social life would be frustrated.

In areas more remote from major centers, access to fundamental rights can only be achieved through public transportation. And to ensure that the entire population can enjoy these rights, transport needs to be public and free. Otherwise, people who have no money to pay the fare may not reach their destinations and to exercise their rights.

The “zero fare” or “free pass”, will be made through a Fund for Transport, which will use funds raised in a progressive scale, ie: those who has more pay more, who has less pay less, and who can’t pay doesn’t pay. For example, the property tax for banks, large enterprises, mansions, hotels, resorts, malls etc.., Shall be proportionately increased so that the richest sectors of society contribute properly, distributing income and guaranteeing the existence of a transport system that is truly public, free, high-quality and accessible to all people, without exclusion.
Original article here: http://tarifazero.org/tarifazero/ 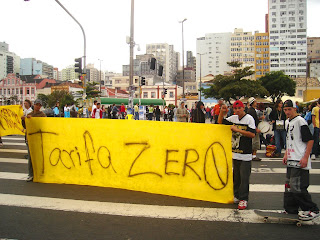 When a system goes into crisis, all outputs are merely palliative historical patches, which soon will bust before the torrential river of History. And faced with a crisis of a system, it is those who always challenged to state clearly what are their strategic perspectives to a new system. That is, a system that is consistent with their historical moment, and with the needs of the society that uses it.

Florianópolis lived two moments of profound radicalization in the city in 2004 and 2005. Two intense uprisings: of week-long confrontation, with brutal state violence, with arbitrary arrests, illegal use of arms, etc... These revolts were an expression of wear, the "failure" - not in the financial sense, but social and moral - of Urban Public Transportation System.

They exposed a fundamental and unsustainable situation: the need for a real public mass transportation, toward the interests of developing society, of the productive forces in general, and the reality of a system falsely "public", controlled by oligarchic and delayed families - or even by large international corporations - which are governed primarily by profit, not the res publica. That is, public transport is seen as a huge market, a source of ownership of fat slices of the budget of families, a source of economic and political power. And as such, it is interesting that this system is maintained for the same groups.

It turns out that in society there is class struggle. And in this struggle that is a contradiction between opposing interests, and that every exploration has its limits. And the limit of exploration on public transport has reached its maximum degree.

Besides the historical “Revoltas da Catraca” (the name which are called the revolts where popular demands were guaranteed) in 2004 and 2005 in Florianopolis, the “Uprising of Buzú” in Salvador in 2003, and similar uprisings that toppled or challenged rates in Vitoria (ES) 2005, Uberlândia (MG) 2005, Criciuma (SC) 2005 Fortaleza (CE) in 2005, and Recife (PE) in 2005, showed that this is an inevitable wave. At that moment Brasília (DF) and Aracaju (SE) are fighting against a rate increase in urban transport. And this wave will not stop, mainly due to the concrete fact of 38 million Brazilians have no access to transport due to its rates, and that number grows every time that the prices increases.

Solution exists. It depends on a successful combination of factors: popular mobilization, strategic design of a model transport system, and also direction and political determination to implement it. From the standpoint of popular mobilization, there is an expectation rather positive, as the balance of two consecutive wins (2004-05), and the great show of strength of the population in the two revolts. From the viewpoint of the model we need to make a broad discussion in society. Our determination is to dare. Think of transportation as essential public service. Public transportation should be removed from the hands of private companies as key element to overcome the agenda of profitability, which is the core issue that excludes millions of transportation. Transport must be managed by government agencies, municipalities, aimed at the interests of the community, and ruled in another form of financing.

Setember, 2009.
Marcelo Nascimento Pomar is a brazilian historian and one of the founders of Movimento Passe Livre (MPL) or "Fare Free Movement" in Brazil.

Trailer for IMPASSE, movie about Brazil movement for the free pass

This is a documentary about the protests in 2010 against increases in fares of public transport in Florianopolis. City in south of Brazil, state of Santa Catarina. Since 2004, the population of this city goes annually to the streets to express their rejection of any unpopular reform in the transport system.

In 2004 and 2005 the population had met its demand and the price of the bus fare back to the previous one. It took many days fighting to conquer it. Around 7.000 people participated in the demonstrations, blocking streets, occupying Transit department's office also the city council, showing how's absurd to make the people pay for the profit of 4 owners of the private bus companies.

That was only the beginning of the fight for a free public transit. Yuri Gama
às 9:11 PM No comments:

Support the Movement for the Free Pass

We will be posting here to inform the english-speaking world about the Brazil movement for free public transport.
às 12:06 AM No comments: