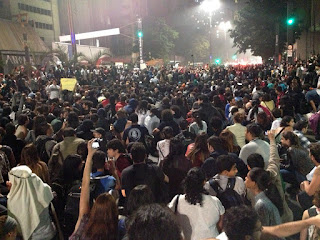 Businessweek: "The Sao Paulo-based organization behind the protests, called the Free Pass Movement, wants to abolish bus fares altogether, arguing that the public service should be free and improved so city dwellers can move more easily around the city.

While the movement has existed since 2005, its following has grown after Sao Paulo last month announced it was raising bus fares 7 percent, or 20 centavos, to 3.20 reais ($1.50).

The protests were also under way in Rio de Janeiro tonight, blocking traffic on the main downtown thoroughfare."