Frente de Luta pelo Transporte: "In San Luis, capital of Maranhao, City Hall is occupied by various social movements for six days. The main demands of the movement are municipalization of public transport, free pass student and immediate reduction of the fare to £ 1.90, towards zero tariff for all. Protesters still charge improvements in health and public education. For more information, go to the occupation!

The Front for the Struggle for Public Transportation in Florianópolis gives her full support to this occupation. If you know of other struggles for zero tariff off Brazil, please contact us so we can promote and show our support."
às 10:47 PM No comments:

Southern Minas: "The town of just over 20,000 inhabitants have transportation since October 2011. Every trip, vehicles travel 28 kilometers of streets and avenues through various neighborhoods. In the bus, no turnstiles, but there are collectors. Just go and continue the trip without any expense. Unlike cities where public transportation is complicated and overcrowded in Muzaffarnagar, generally, all passengers are seated." 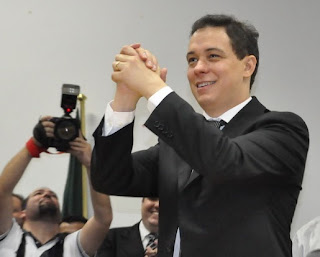 Edson Moura Junior
Portal Paulinia: "Within a few hours of becoming of the new mayor, in Southeastern Edson Junior Moura (PMDB), announced zero tariff on transportation to population from 1 October this year. Paulinia becomes the first city in the RMC (Metropolitan Region of Campinas) to ensure free public transport for residents. The rate will be fully subsidized by the government..."

Bloomberg: "Brazil is preparing to disburse 380 million reais ($167 million) of subsidies to ethanol mills in the northeast by 2014 to renew sugar-cane crops and help growers recover from the worst drought in five decades."

Whom do the police protect? Pregnant woman tries to get on #transit, police attack.

Frente de Luta pelo Transporte: "The catracaço had already begun. Men and women, of all ages, passed over or under the turnstile. But, as in any other place, pregnant women need special conditions.
For the pregnant woman could take advantage of the Zero Rate, the door had to be opened. It was not what happened. The guards did not give terminal property, even with the insistence of the protesters.
The confusion began when the gate was removed by force, paving the way for pregnant women and facilitating Tarifa Zero B TICEN platform.
What we see then is unvarnished violence of the military police of Santa Catarina. Two people were detained. The demonstration then headed up to the front of the police station until they are released.
In the back, dozens and dozens of police officers in the terminal, are the terminal posts, ensuring the dirty money of entrepreneurs of public transportation. By omitting income and lying about the system operating costs, companies steal the people day after day. To the Mayor and Governor, who have in the PM, it seems that it doesn't matter. Pretend to believe his friends entrepreneurs and give orders to the military to ensure the daily theft in rates. Police to the bosses."

MPL Joinville - for a life without turnstiles: Demonstration July 2!

MPL Joinville - for a life without turnstiles: Manifestation July 2!: The recent demonstrations in Brazil demonstrated the power of organized people. After several weeks of struggle, fares of public transport decreased in Sao Paulo, Goiania, Rio de Janeiro, Porto Alegre and other cities. The struggle for a real public transport must not stop.
In Joinville, the reduction of ten cents in no way alters the fundamental problem of transport: it remains private, without public control, and still very expensive. In January 2014 the contracts of Transtusa and Gidion end. The city aims to make a bid in which everything will be the same. It's time things change.
The Free Pass Movement fought for more than eight years in Joinville and has a project for public transport. The Zero Tariff, Free transportation project, funded by progressive taxes (property tax on high luxury mansions, vacant land, property taxes on the second car etc..). This is a project that is already fully performing in more than 50 cities around the world.
The bidding city will decide the next 15 years of transportation in Joinville. It can still be expensive and with no quality control by the population, or we can fight for public transport with real workers' and users' control.

Come fight with us for Zero Tariff in Joinville Brazil and everywhere!