FRIDA / IGF 2011 Award: Project: TarifaZero.org: "TarifaZero.org is an independent site with the goal of bringing together collection of materials (articles, audios, videos, stories, news, etc..) Produced on the theme of urban mobility and the right to the city, with an emphasis on defense of free public transportation - as a public policy that encourages the reduction of automobile use in cities, income redistribution and social justice that benefits the majority of the population. This idea is founded on the understanding that transportation is an essential public service, a fundamental right that guarantees people's access to other fundamental rights such as health and education. In the farthest reaches of large cities, access to fundamental rights can only be achieved through public transportation. And to ensure that the entire population can enjoy these rights, transport needs to be public and free. Otherwise, people who can not afford to pay the fare can not reach their destinations and exercise their rights."
às 4:45 AM No comments: 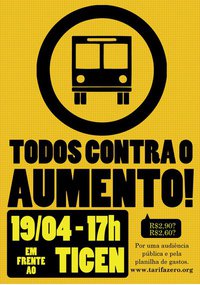 What is the Free Fare Movement? 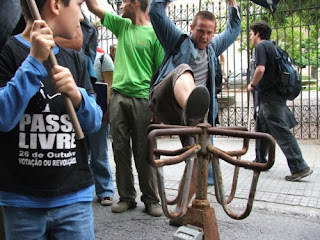 From now on, the offensive for the free fare

In the morning of this Friday, one day before carnival holiday, about 2.000 people (according with the police, what give us the freedom to think in more people than that) protested around the regional city hall of MBoi Mirim, São Paulo [Brazil]. The spontaneous demonstration has its origin on the general dissatisfaction with the public transport – high fares, less buses, cut of bus lines and overcrowding buses.
The protest made me remember a part of the book “Transporte urbano nos países em desenvolvimento” [Free translation: “Urban transport in developing countries”] written by Eduardo Vasconcellos. There’s a part in which the transport researcher discusses how the public transport was left behind in the lobbying of public politics at the time of redefinitions that Brazil experienced and culminated in the 1988 Citizen’s Constitution. One of the reasons, suggests the author, it is because the lack of organized struggle and long-term vision by the social movements with respect the public transport.
It says him: [Free translation]: The new democratization of the political system initiated in 1982 wasn’t enough to bring important improvements in transport conditions, due to the decrease in public investments, high inflation, and the possible growth of unemployment. The social movements, around this issue, were limited in react to the dramatic lack of transport in remote areas or the occurrence of fatal pedestrian accidents of children in residential streets. In both cases, all the solutions adopted were so urgent as the social movements in itself, so, there weren’t real transformations on the transport or displacement.
I was thrilled with the news of this spontaneous protest, as well as with all of the other protest all around Brazil, against fare increases, not only for the joy that is to see people organizing themselves, but also due to the clarity that now we have about how transportation is, being a discuss subject in the agenda of the society. But we can’t let one more decade escape from us and only focus in short-term resistances, needed of course, against high fares. One hour the breath of these resistance movements will end. So now it’s the most important time: an offensive towards a complete change of the model of the system. After all, we don’t want to spend all of our lives discussing how much will raise and how many bus lines they will cut, do we? In Florianópolis, the Movimento Passe Livre (MPL) - (Free Fare Movement), with the help of others organizations, will start the struggle against the bus fare raise, launching a discussão in the city about the free fare. In Joinville, the MPL is also starting to build a law project for a free fare system, and it seems that in São Paulo, the MPL will walk in the same direction as both cities. Maybe this is the most important moment in the history of MPL since its foundation. Unlike the important struggles from the 80’s, that were “more urgent than the movements in itself”, we are seeing now a consistent process of struggle that won’t die before the final victory, the right to the public transport assured for everyone.
Original version here: http://tarifazero.org/2011/03/04/daqui-pra-frente-a-ofensiva-pela-tarifa-zero/
às 3:32 PM No comments:

Email ThisBlogThis!Share to TwitterShare to FacebookShare to Pinterest
Marcadores: #tz

Email ThisBlogThis!Share to TwitterShare to FacebookShare to Pinterest
Marcadores: #tz 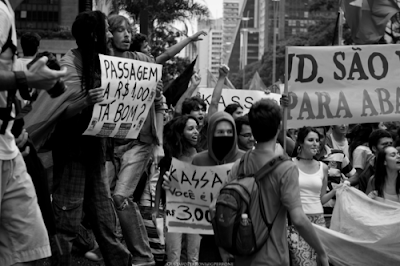 Photo by Caio AMC on Twitter via @gperroni
às 10:50 PM No comments:


The readjustments in the passages of the buses drew protests from students in Joinville, Joao Pessoa, Salvador and Sao Paulo.

In Salvador, students protesting since Monday (3) against the increase of the passages and called for lowering the tariff, the freezing of the previous value and the reactivation of the Municipal Transportation.

In the capital of Paraiba, a protest occurs on Thursday (06) in front of City Hall, downtown. The aim is to protest against the increase and try to reverse the situation.

Also on Thursday the Front for the Struggle for Public Transportation will hold a demonstration against the readjustment of rates in Joinville. The act will take place at 18pm in the Flag Square, downtown.

In Sao Paulo, the MPL have organized activities since November 2010 and held this week to convene a leafleting the people to a rally next Thursday (13) at 17 pm, opposite the Teatro Municipal of São Paulo.

With the forecast increase in the price of tickets in Aracaju, still no date certain to happen, the Association of Residents and Merchants Quarter Industrial articulates with youth leaders and residents of several neighborhoods in the capital of Sergipe a movement against the increase.
Brasil de Fato