In this account "Black Bloc" is presented as one side, and the police as another. They are the same side. Black Bloc is undercover police.

Police stand around and a journalist dies while covering a protest in Brazil | Public Radio International: "This particular protest was part of an on-going protest over public transportation fares. It’s part of the so-called “Free Pass” movement. And it took place at the central train station. Davies says a group of protesters called the “Black Blocs” were destroying ticketing machines.

But Davies says both sides are to blame.

He says the police are military police and do little to contain the protests. In this instance, the police just fired tear gas and stun grenades into the area as hundreds of commuters were heading home from work at around 7pm in the evening."

Email ThisBlogThis!Share to TwitterShare to FacebookShare to Pinterest
Marcadores: #aps

3rd act "lower cost, lower the rate": "We continue the struggle for the immediate transfer to the bus fare from exemption of Operational Cost Management (CGO) that will grant the bus companies a bonus of 22 million dollars per year. This value could correspond to a reduction of 5 cents on each pass according to calculations of City Hall itself. . Also require the disclosure of company accounts by bus, provided by contract, promised and postponed numerous times by the city since the demonstrations June/2013
may the black box is indeed open Check the history of this struggle: http://goo.gl/7FVTzO and http://goo.gl/AZvdCh ."

People of Rio de Janeiro fight back against lies, repression, and fare increase 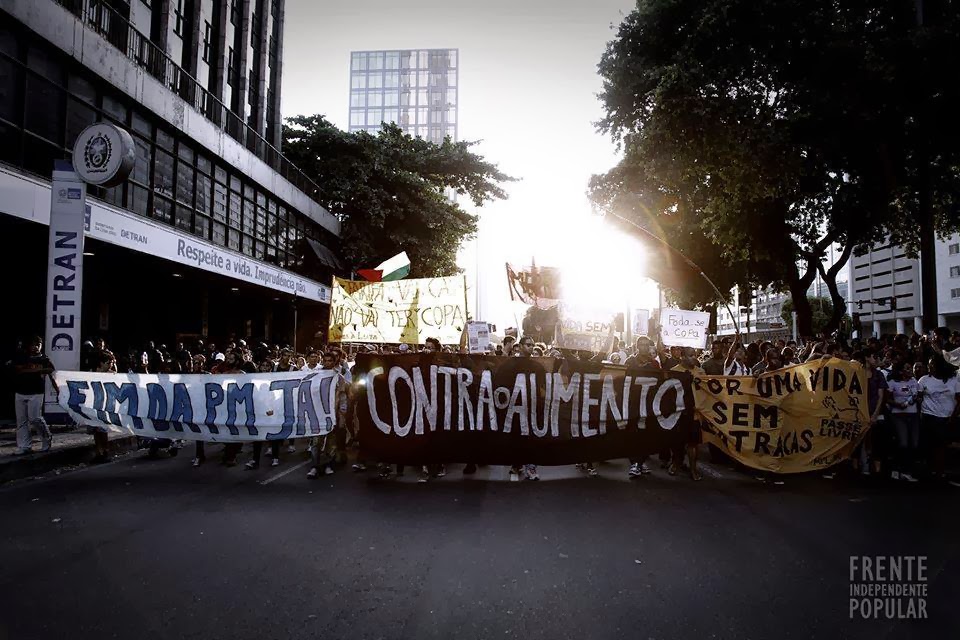 Free Pass Sao Paulo: "Rio fights back! Via Free Pass Rj : "Even before the campaign to criminalize the free fare movement by media and government, from the tragedies of the act of 6th (2 dead and several injured in the conflict triggered by the brutal repression the PM), the population back to the streets to fight the increase of fares to 3 real and put back to £ 2.50. " And the fight continues, with another protest planned for Feb 13th, Thursday! FIGHT FOR A LIFE WITHOUT TURNSTILES"
às 12:49 PM No comments:

saopaulo mpl : "Yesterday, the population faced a chaotic situation in the subway. A train of 3-Red Line is completely powered off, disabling it with the air conditioning system of the wagons, forcing passengers to get off the tracks do not pass suffocate. Any operation of the Red Line was paralyzed for more than 5 hours and there were also outages on lines 1 and 4-Blue-Yellow. The revolt of users spread for at least 7 seasons"
às 1:11 AM No comments:

theguardian.com : "At 5am every day, Paula Elaine Cardoso begins her long commute from the poor periphery of Rio de Janeiro to her care worker's job in the upmarket resort of Copacabana.

After a walk to the bus stop, she has to wait about 40 minutes to get a seat, then – provided there is no breakdown or accident – she has a nearly two-hour ride in the traffic, usually without air conditioning and often in temperatures over 30C. Hot and tired by the time she reaches the subway station, she must then line up again for another jam-packed journey to her destination.

Most days, she gets in shortly before 9am, the 22 miles having taken close to three hours. It is the same story in the evening. By the time she gets home, usually long after dark, Cardoso has spent almost a quarter of her day, and a sizeable share of her income, on public transport.

Little wonder then that she – like tens of thousands of other Rio residents – is furious that bus fares in the city are due to go up on Saturday."
às 8:21 PM No comments:

Ever thought that transportation is one of the few utilities paid at the time of use?
Imagine if education, health, police, garbage collection and street lighting were paid individually?
Social rights benefit all of society and must be paid by all. This is the idea behind the Zero Tariff, a proposal that has been growing worldwide. In Belo Horizonte, our campaign is being done by collecting signatures for a bill of popular initiative.Join!
às 10:01 AM No comments: 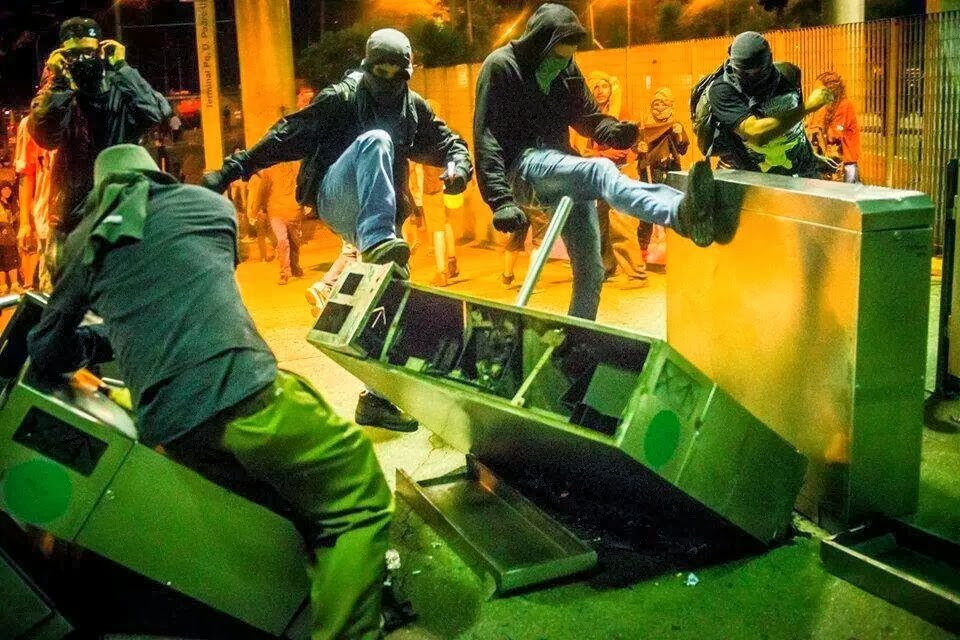 This photo is on social media. It is clearly staged. No one can kick over a stainless steel turnstile. Look at the people in the background. Looks like stage scenery. So fake!
às 11:24 AM No comments:

This is an attack to users of the public transport system and also to all who have decided to stand up and use the street as a space for the exercise of politics . The reduction of tariffs in June 2013 is now the most powerful symbol of the strength coming from the streets . Therefore advocate reducing tariffs is fighting for a prospect of popular and mass struggle

Thus invite all groups , individuals and groups to join in this fight , on 06 / 02 at 17h , leaving the Candelaria again. Take your angst, their anger and everything else you see fit to make an active and combative act. The street and the fight does not belong to this or that team, but to all of us and we all win move for a more just and free society for all turnstiles !"