Brazil's Free Fare Movement: 'We Will Not be Intimidated' 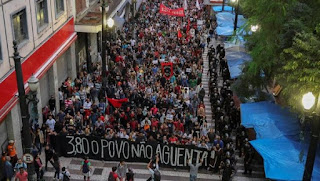 teleSUR : "The Free Fare Movement has called for another round of protests in the city of Sao Paulo against transit fare hikes and police repression after its last demonstration was met with rubber bullets volleyed by local police departments.

“We will not be intimidated. The fight will only end when the (fare) increase is revoked,” read a statement released by the movement.

Organizers have called for a demonstration and march for this coming Tuesday at the Estação da Luz, a major transit hub in Brazil's largest city."
às 12:01 AM